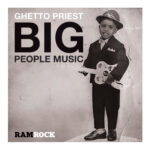 Ramrock Records are hugely excited to announce the forthcoming release of Ghetto Priest’s ‘Big People Music’ LP, the long awaited follow up to his 2017 album, ‘Every Man For Every Man’. The idea for this LP was originally floated in 2018 and was intended to be a 6 track EP called ‘Songs for my father’. However, once Ghetto Priest got in the studio, the idea expanded as he went the extra mile adding his personal favourites, conjured up from childhood memories of his father’s tunes being played on the family radiogram with additions from his youthful excursions. A magical mixture of tracks associated with the greats – Nat King Cole, Dean Martin, Slim Smith, Ken Boothe, Aaron Neville – ‘Big People Music’ can lay claim to being the 21st century’s equivalent of John Holt’s ‘1,000 Volts of Holt’ – an absolute essential on every Blaupunkt radiogram on a Sunday and a blues party staple.

The combination of standards and righteous releases were mixed down by the Bishop of Dub, Adrian Sherwood who blessed the project with the title ‘Big People Music’, a powerful acknowledgement to those tunes which filled many a Caribbean household with immeasurable sentiments that echoed down through subsequent generations.

Please be upstanding for Ghetto Priest and ‘Big People Music’.
‘In memory of the Right Honourable Arthur Beresford Townsend – My Father’