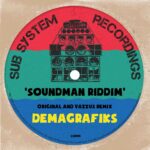 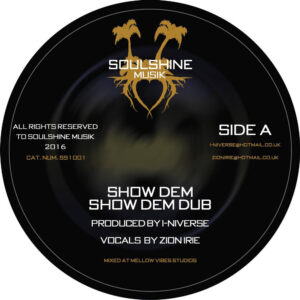 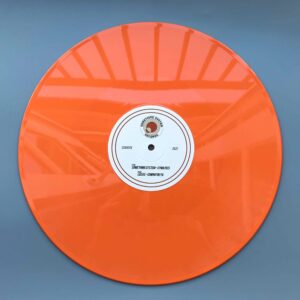 Drum and Bass Vinyl | Jungle Vinyl | RECOMMENDED
Get a Casavinyl monthly subscription and get this record from only £9.35 - click here for more details.
Read our review at Wired.com

“Demagrafiks; A new name for the scene but the people behind it are far from new, they both had an important role in the foundation of the jungle sound and the 2020 lockdown finally brought them together for the first time. Up steps M-Beat alongside Missing!  Sam explains how this collaboration came about.

“Although we were both producing in the 90’s I had never met M-Beat before but of course it goes without saying that he was a huge inspiration for me back in the day! I was initially introduced to him last year by a mutual acquaintance, Steve, who used to work at Renk Records in the 90s golden era. Myself and M-Beat met up for lunch and it soon became apparent that we had similar perspectives on music past and present. ‘Soundman Riddim’ is our first collaboration, a contemporary jungle flavoured dnb roller but with nods to our roots.. hooky ragga lyrics, original 90s sample disc pad samples, chopped up breaks and even a cheeky chipmunk vocal – 93 motifs inna 2020 style! It’s great to have had the opportunity to work with a true jungle legend even though lock down meant it was all over Zoom and Whatsapp! Demagrafiks is a name for this project and won’t necessarily be used again so this is a super rare and sure to be collectors item for any M-Beat fan! We have also been working on some other projects together which we will be announcing in the future. For the flipside of our collab we wanted to showcase another rising star and somebody who is strongly influenced by the 90s rave sound. Step in Yazzus on remix duties!  Part of the 6 Figure Gang who have been making huge waves in the scene, this was a very exciting remix and another opportunity to represent the 160 sound championed by Sherelle, another 6 Figure Gang member and others who are mashing up various styles of rave, jungle, footwork, juke and techno. Yazzus has taken the jungle roller original and twisted it into a hardcore rave monster with deep, bouncing kicks, jungle subs, gritty breaks and killer rave stabs. This is one of the old hardcore heads and new alike whether you were raving in ‘93 or drawing inspiration from it in the 2020’s Sam concludes.”