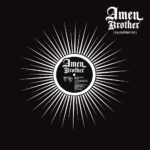 ‘Free Your Mind’ is an iconic track made and released in 1991 by the Cowan brothers – Mark and Andy. They had previously put out a couple of records beforehand, but the release that got them forever known is the ‘Psychology’ EP, which the original version of ‘Free Your Mind’ appears on. It was also an all-time favourite tune for Amen Brother boss, Brent Aquasky. So much so, that when he started his repress label, Vinyl Fanatiks, he hunted down the brothers in order to re-release it.

But in 1990 Mark released an EP under the name of Dik Fozbee, inspired by the US house and techno scene. An EP that is highly collectable and was also sampled by 2 Bad Mice on ‘No Respect’. After that EP was released, Mark was tracked down by a young Ron Wells AKA Jack Smooth. Ron was about to make his musical debut as Smooth and Simmonds, but they needed someone who had an Akai 950 and knew how to use it. In steps Mark Fozbee, who lent them the bit of kit and gave them pointers on how to operate it. This is where this EP’s name originated from.

Forward time by 31 years to the buoyant world of the rave repress era. Remixes needed to be done of ‘Free Your Mind’ and both Fozbee & Cooz as well as Ron Wells were big inspirations for Brent Aquasky, so bringing them together for the first time was an idea that thankfully both parties were into. The outcome is this EP… two smoking remixes by Jack Smooth; one in his Ron Wells techno fused direction, the other in his Jack Smooth proper Jungle Techno vibe, which is hugely relevant as Jack Smooth was the creator of that sound in the early 1990’s.

But on top of that, the guys decided to write a brand new track together… ‘Redress’, taking things back to the 90’s London  techno era.

These guys are the core of what would become rave in this country and in turn hardcore, then jungle. If you want to learn the history of drum and bass, these are the guys to research. Pioneers!