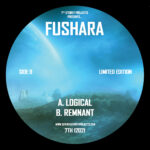 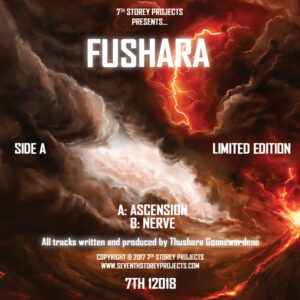 Drum and Bass Vinyl | RECOMMENDED
Get a Casavinyl monthly subscription and get this record from only £7.65 - click here for more details.
Read our review at Wired.com

7th Storey Projects are delighted to announce an immediate return for Fushara to our label following the success of his previous release with us (Ascension/Nerve, cat number 7TH 12018, released October 2017).

Consistent with his previous output, this release contains two epic tracks which evoke the themes of industrial and urban decay which permeate much of his work.

We’ve found it hard to put the music into words, suffice to say they are true breakbeat fueled, sonic journeys that feature razor-sharp drum programming and foreboding atmospherics – a must for any jungle/dnb head with a penchant for their music thoughtful, dark and moody.

Fushara aka Thushara Goonewardene is a London based electronic musician working with breakbeats, samples and synthesiser. A constant theme for his music is urban decay. From the late 90’s Fushara has been involved with the London scene as a raver, DJ, and Producer. He has produced experimental work for labels such as Pineconemoonshine, MJAZZ and more recently Scientific Recordings. In 2015 he set up an imprint Lone Foundation to showcase experimental bass music collaborating with DAAT and others. More recently he has made a return to work with breakbeat collaborating with Infest for one of his tracks on his debut on Criterion Records and has signed to Flex Recordings for a forthcoming EP.