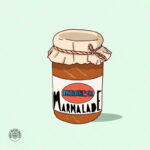 In a world of constant releases & quickly forgotten pieces, preserving our creations sometimes works out for the better.
In late 2019, Brainorchestra created this rap work after his highly anticipated debut rap, EP From The 908. This follow-up project features the likes of legendary producers such as Ohbliv, Foisey, Derrick Braxton, Good Food & more—Brainorchestra conjured up a medley of styles & let it sit.

With High Water Music, Brainorchestra is releasing his third rap oeuvre, Marmalade, with hopes that this time lapse favorably aged his records for the World.