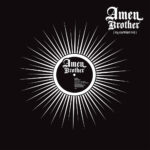 Ova Doce self-released a highly sought after EP in 1992 called ‘Feel The Rush’ which he used the money that his parents gave him for his 18th birthday to fund. His Dad hated rave music, so to annoy him, Nathan AKA Ova Doce sampled Bob Dylan in one of the tracks. Surprisingly his Dad quite liked it and was intrigued by his sons work. Fast forward 28 years and that track, along with others from the EP and some unreleased tracks written in 1992 were put out on Vinyl Fanatiks.

Amen Brother is the young brother of Vinyl Fanatiks and its ethos is to put our brand new hardcore, rave and jungle tunes by original artists from that era (though this USP is changing in 2022). Ova Doce has arrived on label brining his authentic Walsall rave sound with him, creating 4 brand new tracks, though a few are actually sketches created back in the 90’s that he recently finished off.

Think Acen, think pitched up chipmonk vocals, think being off ya ‘ead in a field raving ya tits off! Now check this EP and feel the rush!