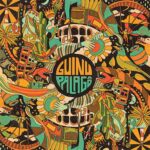 Brazilian musician, songwriter and producer Pedro Guinu makes his debut on Razor-N-Tape with PALAGO, a record that speaks to the artist’s relation-ship with hometown Rio de Janeiro, and the city’s strong connection to the roots of Brazilian music and African rhythms.

Recorded live in-studio, the LP captures the qualities and sonic textures of 1970s era analog recordings, evoking the sounds of Eumir Deoda-to, Marcos Valle and João Donato. Characterized by tasteful arrangements, improvisations, heavy grooves, and polyrhythms, the sprawling album fuses styles and influences to create something new and unique while maintaining a link to the past.