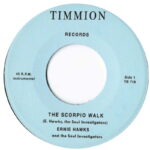 Get a Casavinyl monthly subscription and get this record from only £9.99 - click here for more details.
Read our review at Wired.com

Ernie Hawks’ debut album “Scorpio Man” is nearly here, and about to be released during the first quarter of 2018. The way will be paved with a fresh 7″ single that lifts the gritty jazz funk of “Scorpio Walk” from the album on the A side and pairs it up with the mystic groover “Message of Love”, a non-LP track only available on this release.
As the track to start up the upcoming album, “Scorpio Walk” rushes on like a manic villain from an art house spy film. A groove made of a murmuring fuzz bass and a surf guitar is suddenly released into heavenly choruses, where the man of the hour lifts the ambiance with a series of lyrical flute solos.
“Message of Love” sounds like an homage to the gently pulsing library music funk from the mid 1970’s. Ernie’s flute lead is accompanied by bubbling Fender Rhodes, which carries the track forwards like a shy cousin of Michel Sardaby’s “Welcome New Warmth”. Seductive male vocal wailing haunts in the background, while the track proceeds without haste in its realm of lost budget X-rated movie soundtracks.