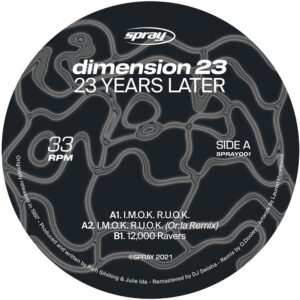 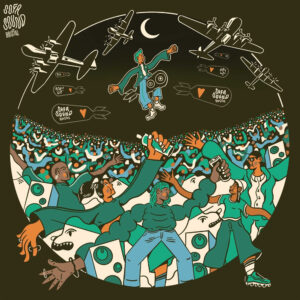 Washed ashore from the depths of the sea and speeding by the spectral comets in the universe, the debut EP by Sentier Rose is a voyage extraordinaire. Producers Fiero and Pierre Klein (aka BiØle)—who were both New York City based at the time—began their collaboration into the sounds of Italo disco in 2019, bonding over their shared home country of France and their devotion to vintage synthesizers. The collaboration’s result is 40.5755° N, 73.9707° W, an EP —inspired by artists such as Mike Mareen, Grant Miller, Fancy, Loui$, and Space Art—that fits right into the realm of dance music from the mid-1980s, a trio of songs that could sit comfortably alongside 12” singles from the beloved ZYX record label.

Sentier Rose’s use of vintage hardware such as Sequential Circuits OB6, Ensoniq SQ80, Roland TR-707, and the Linndrum emanates a rich authenticity to the EP. 40.5755° N, 73.9707° W opens with “Hadal Zone,” a dreamy atmospheric song that features emotive vocals by Fiero tells of the realm of Hades: the deepest, most treacherous, region of the ocean. From its chilling abyss to the dance floor heat of “L’ Espectre,” there is an apparent appreciation to the foundation of Italo disco and its uplifting, other-worldly atmosphere. The final track, “Tempel” is an instrumental that is moody and lush, layered over an addictive beat. Additional remixes on the EP find Sentier Rose as the bridge between Italo’s originators and the future of the genre. Antoni Maiovvi, Giallo Disco Records’ boss, injects techno minimalism into “Hadal Zone” that retains its old school feel but invites new possibilities into its composition. The remix by Daniel Diamond adds a suspenseful horror disco element to “Tempel” that will send shivers through the body.

With their commitment to the genre that’s found in its production, Sentier Rose retains the very best elements of Italo disco from decades ago: the pop sensibility, their eccentricities, and an unbridled devotion to appeal to the dance floor. 40.5755° N, 73.9707° W will take you on a journey, one that reaches to all ends of the world.