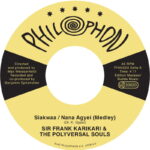 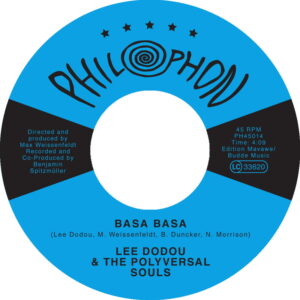 Get a Casavinyl monthly subscription and get this record from only £11.26 - click here for more details.
Read our review at Wired.com

Frank Karikari is the son of legendary Highlife musician Ralph Karikari who played bass on countless classic albums such as “Sikyi Highlife” by Dr. K. Gyasi & His Noble Kings. So, Frank grew up surrounded 24/7 with high class Highlife music plus he has inherited the natural talent of his father. Now he teamed up with the Polyversal Souls to keep the spirit of Highlife alive.
“Siakwaa / Nana Agyei” are two songs taken from above mentioned album “Sikyi Highlife”. Frank gets here some vocal support from the original court singers of the Ashanti king, which fits perfectly, as both songs are praise songs to the king.
“Odo Agye Gye Me” is composed by legendary Kumasi based singer Baffour Kyei, who sang for such groups like Kyeremateng Stars or B.B. Collins & His Powerful Believers. Besides creating this song, he is part of the choir on this future Highlife classic.