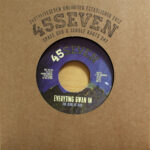 Drum and Bass Vinyl | Jungle Vinyl | RECOMMENDED
Get a Casavinyl monthly subscription and get this record from only £7.65 - click here for more details.
Read our review at Wired.com

Questions? Request a Call Back
The Duke Of Dub - Everyting Gwan In / Fight Dub [7" Vinyl]

We are writing the year 3021. The very first gene-manipulated virus-free post-covidians made it to carry their infra speakers back onto earths surface to play sublows for the concrete jungles, or whats left of them at least. They brought their ancient rituals and lullabies from their dungeons: sounding like a dark future of Dub without nice and happy skanking where only ruff and rugged dirty bone structures have remained the centuries below the planet’s crust.

The tribe’s chief a.k.a. The Duke Of Dub hands down two bare riddims with a jukey groove, highly detailed breakbeat layers and anything closely dubby only greeting from a very far mountain of suffaration:

Everyting Gwan In opens like an easy halftime beat, but sucks the listeners into its roughness quite fast, allowing no breath or sun inside between all them sinister soundscapes and speech scraps. Fight Dub appears to be fried in the same pan at first, but got a slightly more stepping bass, lifting the classic breaks and vocal bits up into a merciless footwerk climax towards the end. Jah man!

a1. The Duke Of Dub – Everyting Gwan In