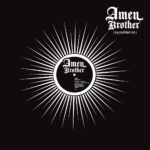 X-Plode is a master of the 1992 rave sound. Listening to any one of his tracks, you could easily imagine them being part of a Top Buzz set back in the early 90’s. Hailing from Bolton, Lee aka X-Plode self-released his debut EP on white label in ’92, which would go on to be a highly collectable item and in turn would prompt Vinyl Fanatiks to track him down, which was not easy I can tell you, in order to repress it in 2020.

A friendship was born and in turn Lee was inspired by the interest in his old EP when reissued that he decided it was time to start making music again, 27 years after he downed tools. And we are very luck he has, because he is a rare talent, with an ability to capture an era in music so genuine and respectful that you would struggle to even tell it was made in the 21st century.

This is X-PLode’s second EP on Amen Brother and another EP has been made for a new label run out of the Vinyl Fanatiks stable called Acid Boom, where Lee showcases his unique ability to perfectly capture another era of British dance music… Adddiieeeeddd!